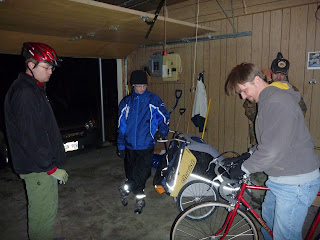 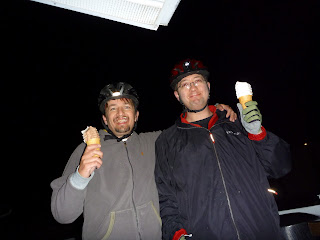 Johnny and Tom eating their ice cream (i.e. checkpoint #1 in the alleycat.)  At this point they have already won the race since no one else knew how to read. 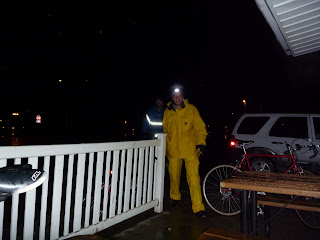 Lorne and the Duker arrive at the Hut to down their cones.  Lorne's rainsuit prepared him adequately for the rain.  A mild drizzle...Lorne takes it to "The Perfect Storm" level. 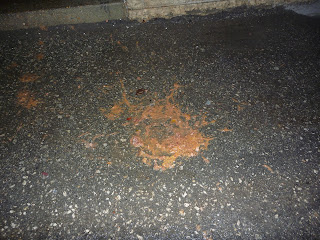 This was the puke we discovered near our rides after leaving the bar.  There were more 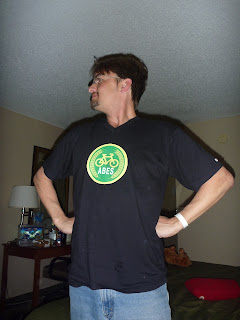 Johnny models his awesome ABES shirt.  The winner got the shirt and Johnny beat Tom in a coin toss.  Better luck next time cousin Tom.

The ABES "Spring Has Sprung" alleycat kicked off the 2010 season in fine form.  The rain may have dwindled our numbers but the true spirit of the ABES was alive and well.

Six racers participated in three teams of two racers.  Apparently ABES is not known for its comprehension prowess....even after repeated warnings (READ THE INSTRUCTIONS!!!) the ABES managed to misinterpret the instructions and mayhem ensued.  Johnny and Tom figured things out first and built and insurmountable lead early on.  Lorne and the Duker also figured things out but to no avail...a silver medal finish.  Shaun and Jeff seemingly wandered aimlessly.  And finished a respectable third of three.  Good times.

The teams finished off at the bar and the prizes were handed out. Johnny and Tom took the gold with some cold hard cash and a prized ABES V-neck as their spoils.  Duker and Lorne took the silver money while Shaun and Jeff got third.

Many beers were consumed.  As were rum and cokes.  And Amaretto and coke.  Small mistake.  Evan (part time ABES member) made a brief appearance and the pre-Easter crowd was looking to party.  As were we.  Just not to the point of barfing like the younger folk.  ABES knows how to hold their liquor.
Posted by Altona Bicycle Enthusiast Society at 9:06 PM