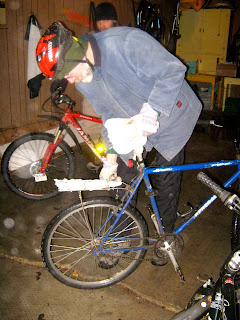 Blogmaster Faurschou came to show me how to put up a slideshow – Thanks Gavin. Shaun, Jeff, James, Paul, Ben joined us. Chips were consumed. We rode a bunch. Tom, Duke, David and Lorne joined us at the clubhouse. Chips were consumed. The Maroons won. Sweet Action won. Ben is going to Thailand/Burmese (Myanmar). Lorne loves musicals. Grad ‘88 is going to Vegas. It was agreed that the AWBF was awesome, probably the best ever. Conversations rambled on.
Agenda items…
St. Patrick’s Day Roller Races – can we put together an ABES relay race? Let me know who’s interested in going. It would be a nice way of showing our appreciation to Tim/Erick for their help at the AWBF.
Alleycat race coordinators are needed for the upcoming months. That’s how the ABES collective works. Volunteer now, book your month and plan a race. Weekend day races were proposed; sounds good. David said he has something special planned for his next alleycat. I hope special is not another word for being shot at or shived.
Spring ride weekend. May 28 – 30. Mark your calendar, plant the seeds and start earning brownie points now. This weekend is a definite highlight of the year. We will be camping at the Falcon Lake chalet (which should be awesome). The spring ride is always a good time.
Posted by Altona Bicycle Enthusiast Society at 5:23 PM