From the desk of Bruce Penner... 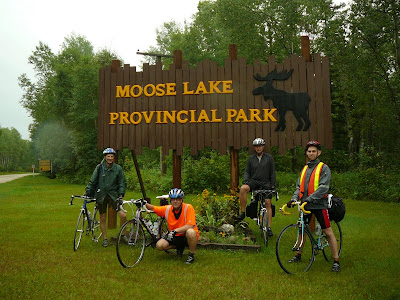 The four of us left the bike shop at 6:00. The rain started about 10 minutes earlier. We were soaked before we left town.

We had character building headwinds for many hours. Forcasted at 20 kms from the east.

We had an early lunch in Vita which was 70 kms.

Many pee breaks and gels later we had pie and ice cream at South Junction. (km 142)

Once we hit Sprague (km 152) we felt as though we had already arrived. 35 kms, heck, that's a little ride to Rose Town.
There was even a little tailwind that pushed us down the road. We got up to 34 kms/hr and Walter kept reminding us that we should "bring it down a couple!"

Did we mention that there were a few flashes of lightning during the ride? There were a couple that made us hunch down a little lower on our bars.
5 kms from Moose Lake we noticed a little smoke rising from some trees. Well, I'll be! A real lightning strike! This huge bough was hanging over some wires with little flames darting out.
Of course we took the opportunity for a pee break and photo op. Walter volunteered. If you can read his lips in the picture, he's saying, "Wow, you can really hear the sparks from here."

Moose Lake is 187 kms from Altona. Since we wanted to break 200, Walter and I chugged back a few kms to make the big Double Century!! Yes!!

Steaks were waiting for us and we enjoyed talking bikes well into the night; at least 9:30 or until Walter and Albert couldn't keep their eyes open any longer.

You might be led to believe that this ride was epic, well, Albert and Dan topped that easily by biking back to Altona on Sunday! See Walter and me sipping coffee while the guys are loading their wet clothes for another attack.
Albert made it back to Vita before he called in the sag wagon. Way to go Albert!
Dan's the man. He made it back to Altona with more headwinds and a leg cramp that hounded him for about 40 k! PLUS. These 2 guys went to Grand Forks on Tuesday. Another 167 kms! Also against wind!

I learned how to draft. I learned how fresh you can feel after a 6 hour shower and how water can lose its flavor after the eigth litre.

I also know that there is a bigger ride waiting for us next time. 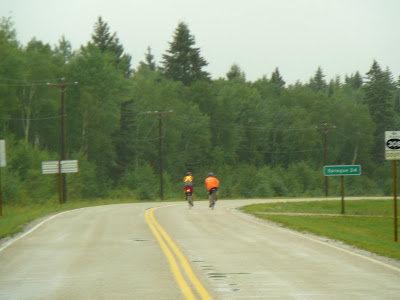 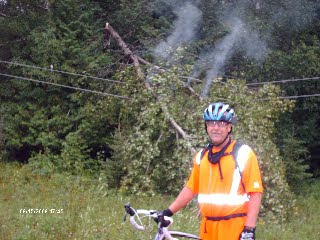 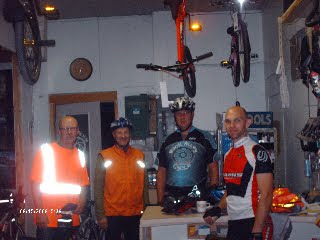 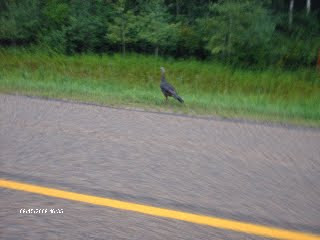