David, Lorne, Duke, Curt F, Curt T, Mike, Derrick, James, Dan and I made up our motley crew for the Thursday night ride. James took the first shift of follow the leader and took us on a quick pace through town and into the darkness of the countryside. Anybody who thought things would slow down when Shawn took the second shift clearly don’t know what pace he’s capable of riding. Shawn took the opportunity to lead as a challenge to prove he can ride extra fast. We all chased him as best we could, some kept up, and some won the race to the clubhouse. Duke had some bike issues - it took him three bikes to make it to the end of the ride.
Paul B and Steve joined us at the clubhouse. The karaoke gave us all the reason we needed to enjoy our drinks outside. The Southern Cross course was revealed, winter riding tips were shared, and BS was at its usual rampant levels. At the cross lab, Charles agreed to construct two barriers (materials donated by Canadian Lumber) for Southern Cross. Thanks Charles. Paul is leaving this Sunday on his European trip. One of his plans is to walk the pilgrimage to Santiago. Paul’s walk is more of a mosey and his plan is more of a possibility, and it’s not so much of a pilgrimage in the holy sense as it is a chance to talk to the ladies. Happy trails Paul. 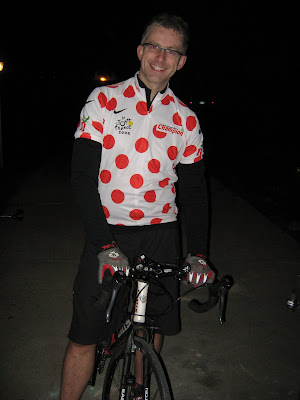 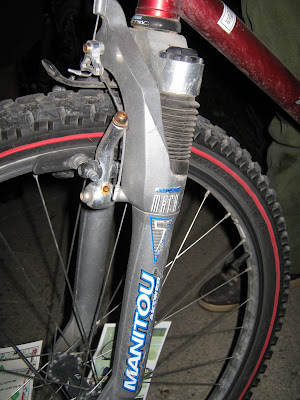 Lorne shows off the 1" travel on his shock. Heavy, yet ineffective. 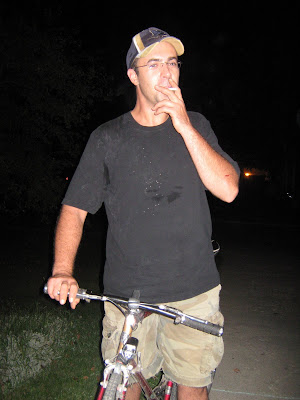 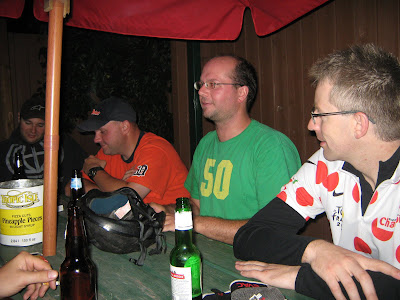