Six hours and many discussions later we arrived.  To the sweet Cuyuna singletrack AND the conclusion that we were indeed insane.  Foregoing a check-in at our hotel we headed straight for the Main parking lot to get in some practice riding.  The devoted Cuyuna MTB Crew was out in full force, doing what they do best: providing us with awesome. 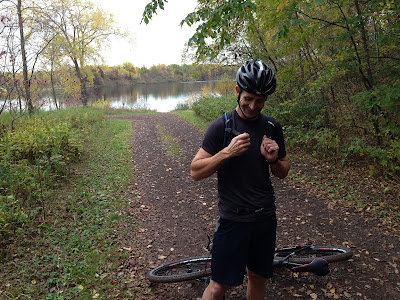 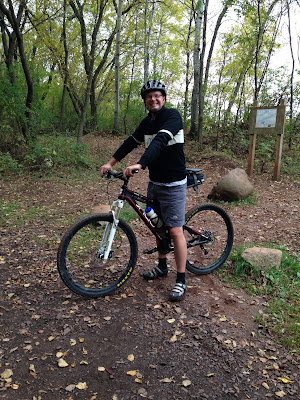 Warmed up and ready we dashed into Town, eager to pickup our race bags.  Heading into the CI Pub in lovely Ironton we came across this sharp unit, property of the local HS team.  Frankie?  One for the ACES? 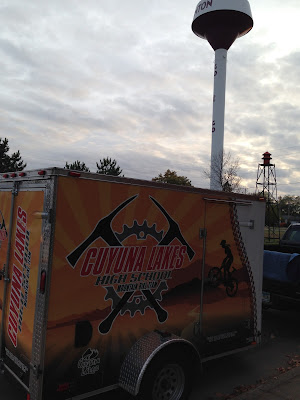 The volunteers at the Pub helped us out, got us waiver-ed and registered and we sat down to some Pub burgers and a few beverages.  Note:  ABES, the CI Pub has New Belgium on tap.

To the hotel, check-in, few nerve tonics before bed and we're done.

Race day.  We got there over an hour before the start and parking was packed.  We ended up close to a half mile down the road.  We arrived at the start area to a ton of cyclists, hanging out and gearing up. 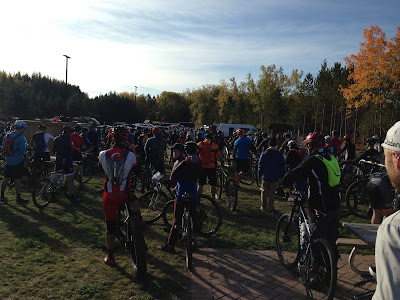 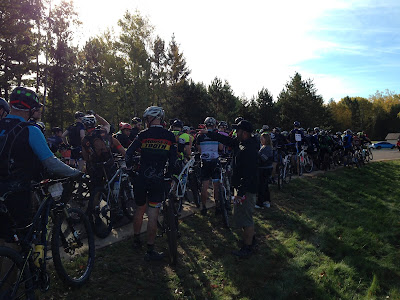 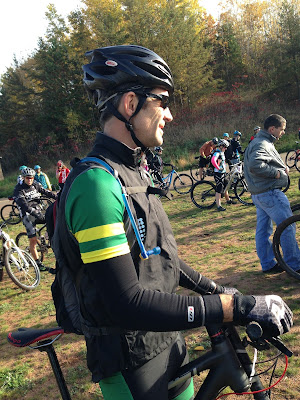 Last minute details were sorted out, things explained, and a stirring rendition of the Star Spangled Banner was played by these young punks.  They kinda rocked it.

Us 50 Milers (typing that still seems weird) were sent off first.  There were two waves and we were both in wave two, meaning that once wave one had passed a certain checkpoint they sent us off.  So what do 205 MTN bike racers look like?


Essentially the race could be broken down into two sections.  The first 12.5 miles was a long out to the West end of the trails and then snaked through parts (or all) of Boot Camp, Mucker Mountain, Little Sidewinder, Sand Hog, Hopper Hill, Low Grade, Miner's Mountain, Chute, Trammer, Crusher and Easy Street.  NO, not ALL trails were utilized.  And the organizers combined trail via logging roads so sometimes it was hard to figure out exactly where you were.  AND, a few trails actually ran sections backwards so....it kinda messed you up.  But there was a legion of volunteers out on the trails and they always pointed you in the right direction.  Not once was I confused about "where to go", even if I couldn't answer "where am I".  This section concluded when you got back to the main parking lot.

The second section headed out from the parking lot and went the length of Drag Line, crossed the HWY and dove into Haul Road, the took the actual road up to the Yawkey Unit.  Bobsled, Tugger and Trout, Man Cage, Skip, back to Man Cage and back to Haul Road.  Then it was back to the HWY and the MN State Trail back to the parking lot.  This was now 25 miles total.  So, we did that twice.

The Race.  Wow.  You'll have to ask Steven his perspective as I can only share mine.  I do know this about his race.  He's fast, but it was painful.  He rocketed across the line at 4 hrs 11 minutes.  Whoa.  He said he was feeling good all race and just had to Giv'r.  SO awesome Steven! 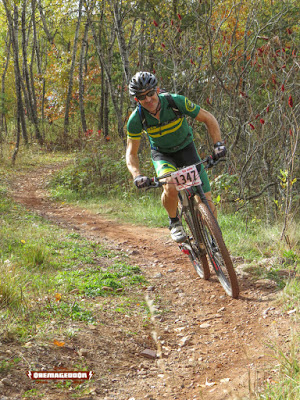 Now, my race.  It was slower.  But equally painful.  The huge mass start broke up fairly well thanks to the first mile or so of snowmobile trail.  Two ruts available to help everyone thin out and find their own pace.  I could still see Steven at this point!  Once we hit the singletrack things started to logjam, depending on who was in front of you.


It felt alright as far as pace for me but the guy in front of me was definitely slower at descents.  Good thing he totally lost me every time we climbed!  I was keeping pace with a dude from Bismarck, behind me on a fatbike, so we chatted it up for the first while.  Very good for getting the nerves out.  After that it was just head down and ride.


The trails are so awesome and fun the first section went by quickly.  Always someone in view, lots of fun and flow, and the legs were feeling good.  My thoughts were "I can do this!"  I was feeling great first time through the parking lot and didn't even stop to grab food.  Keep going I thought, time is definitely of the essence.  The cut-off of 1:30PM loomed in my head and I wanted to make sure I could make it.  Smooth sailing kept me going right through until after Bobsled when I took a short stop for a granola bar from my jersey pocket.  As I munched and cheered those passing me a familiar jersey came into sight.  A voice rang out..."ABES!"  I returned the call..."Country Cycle!"  Always good to see another 'Nuck out there! 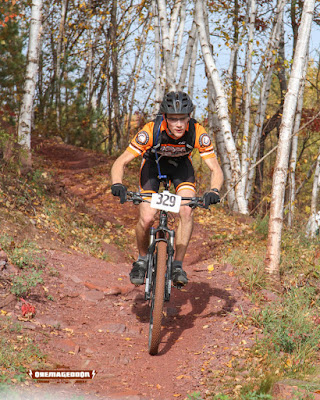 The rest of Lap One went by seamlessly.  Back at the start/finish the volunteers guided me back onto the course and after a brief stretch stop (my back had started stiffening early on) it was back on the course.  Ahhhh Lap Two.  Such a sweet seductress.  Lap One lulls you into thinking you're awesome.  Lap Two grinds you up and defecates you back to reality.  By Lap Two you're mostly riding solo with an occasional rider catching or being caught. About 2 miles into Lap Two I started feeling bonky.  We all know the feeling.  No problem, stop and have a nutrition break.  Oh oh.  At this point I discovered my saddle bag had apparently been left open and everything except a solitary spare tube was gone.  Not cool.  I knew that sustenance was a full 10+ miles of hard, hard trail away.  Things were looking bleak.  So I soldiered on.  I could have dropped out at one of the designated "Lag Wagon" sites.  Or I could have lolly-gagged it back and let the time cut-offs catch me in their net.  Nope.  I came here to finish this motherfucker and that's exactly what I planned on doing.  So I sucked it up and just kept going.  It was all getting a bit blurry but in particular I remember my second meeting with Miner's Mtn.  It really kicked my ass.  I was close to breaking.  It was at this point that a woman went by me, grannying slowly but surely, and yelled something encouraging.  I don't remember what she said but I smiled.  Yeah, I can.  So I did.

The parking lot.  Oh sweet Jebus it looked so good!  I pulled into the feed zone and a kindly volunteer handed me a banana and a water bottle.  As I inhaled them I mumbled for more food and he produced peanut butter sandwiches.  No food ever tasted so good.  These people are amazing! 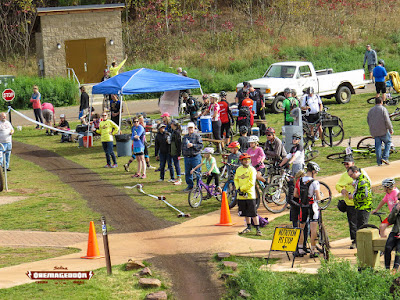 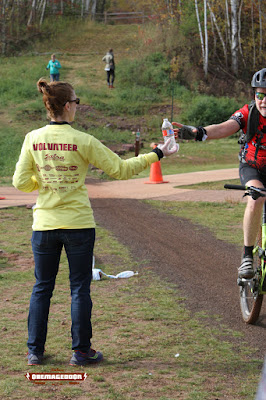 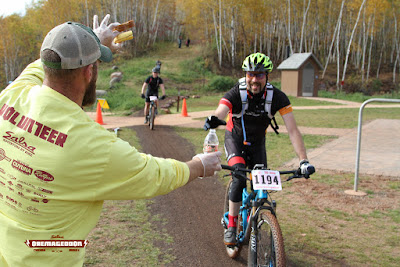 I proceeded to eat 5 PB&J sandwiches, a banana, an orange, a Red Bull, a Gatorade and some Coke.  Oh, and some water.  I was saved.  And I was doing well within the cutoff time!  So back out I went.

The last section was awesome.  A full belly (and lots of belches) and I was a new rider.  I cruised through the remaining trails and hammered home to finish in 5 hours and 37 minutes.  IT felt really good.  It still does.  I doubt anyone had less faith in me finishing than myself and thankfully I proved myself wrong.

Post race.  After some self-congratulatory hugs with Steven it was back to the hotel, clean up, and off to the after party.  This wasn';t as easy as it sounds.  After 50 miles of singletrack your body doesn't feel like doing an after party.  It doesn't feel like getting up off the hotel bed.  Yet we did and had a great time.  The CI Pub hosted us once again, fed us, and provided an endless supply of tasty beers.  Good people and good times. 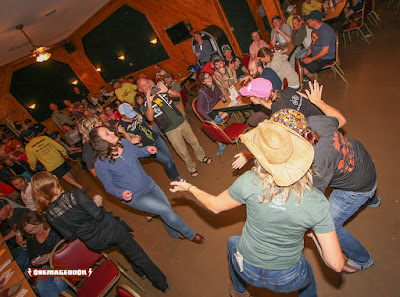 Good times?  Fantastic times!  You (yes YOU) should put this event on your calendar for next year.  Steven and I bemoaned that the only thing to make this better would have a been a bigger contingent of ABES.  Next year gents.

Steven and I checked out the new True North Basecamp as we exited Crosby Sunday morning.  While not as far along as we'd have guessed the site has great potential.  The six rental huts have their own shower building next door and are fairly spacious, easily holding a family or 4-6 adults.  And its so close to town!  Remember the High School?  Well its basically right behind there.  Very nice location.  The campsites are up the hill which spirals up a driveway to a large open are at the top, holding 6 campsites.  This would be sweet for a group outing.  Sites 28-32, remember that.  Here are some pics. 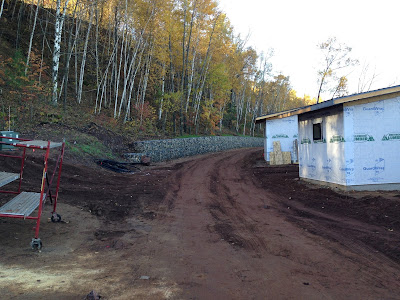 Posted by Altona Bicycle Enthusiast Society at 12:15 AM