Albert, Duke, Steve B, Pole Vaulter, Steven W, Gavin, Franklin, James, Ike, Mark, Tom, Jeff, Mike and I scooted around town on a muggy Thursday night.  We had a good sweat going on as Gavin pushed the pace and kept us racing until it was time to hydrate.  It was so wizard!  Curt, David and Paul B joined us at our clubhouse where the minutes include: Franklin is napping on his holidays, David is getting antibiotics on his holiday for his jerking elbow injury/self-inflicted STD, Sir-Hogs-A-Lot hopes to save kittens from trees as a firefighter - way to go Schiesse, Duke returned from his BC trip where Lorne could not get his act together and Jerry has his own deluxe ThNR, 24 Hours of Falcon good times was discussed, a divorce celebration took place in Rocktona where both parties partied, bike insurance options, Gavin hates mascots – as a kid he abused Baby Tugs Bear enough for the Care Bear to tell him to F*CK OFF!, some kid puked peanuts and orange crush on Duke at a Fury game (which included player and local restaurateur Rico Bravo), the first album/cd/cassette we ever purchased included: The Split Enz, Men at Work and The Police – Synchronicity, DSwank likes the website Chain Love for bike gear, Jeff has updated his Facebook relationship status, Bunge has a summer bike challenge to see which site can cycle the most (cool), Paul B likes fat grooves and sweet moves, and Albert has started to inquire about Road Trip 2013.  Good times. 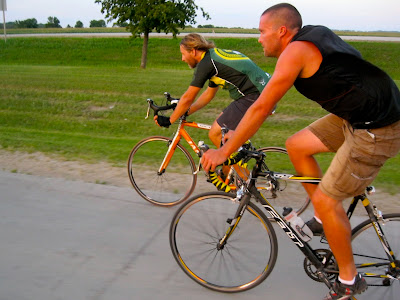 Bruce is planning to show Gretna some bikey goodness at the Hot-Spot Festival this weekend - unicycle hockey (ha) and grass track racing.  The races start on Saturday at 1:00.  Come out and ride/race and we'll show'em how we do it.  This is a co-ed event and everybody who's in the know, "should" participate.  It’s going to be fun so get off you’re A and get on your B in G.  JS
Posted by Altona Bicycle Enthusiast Society at 12:03 PM