That was fun.  Notes from the weekend...
-  The course was 7 challenging/enjoyable km’s of fire-roads, single track, rocks/roots, grass and newly constructed bridges.  JP has a video.
-  I enjoyed 2 night laps.  It's a cool way to ride bike.  Sometimes the shadows made me duck my head, but it also makes it feel like you're going very fast.
- Sitting by the fire and “racing”.
- Team Double A was in tough this year - other teams entered this year so our chances were slim.  David had all sorts of issues so he had it tough on the bike, but the rest of us managed to eke out more laps than last year.  Well done.
- The best team name: Out of our Falcon minds.
- Cycle Chick Andrea impressed everybody with her dogged determination riding lap after lap despite some crashes.
- Meeting a cyclist who was riding an old Canadian Tire bike and only started re-riding bikes on Thursday.
- Stinkler showed everybody they’re pretty good at riding bikes – taking 2nd (Jason) 3rd (Alf) and 4th (Peter) in the 24 hour solo race, 1st in the two-man, 8 hour race with 17 laps (Tim/Kevin), and Craig Doell and co. won the 24 hour corporate (family) division beating out team White Russians who had the best team attitude/drink.
- The only thing missing was more ABES.  That and my butt butter.  That would have been nice too.
- Thanks go out to David for his continuous updates to the blog – great idea.  And of course, big thanks to the good folks at FGBC, RRR and BMBC for creating a great course and organizing a deluxe day of good times.

In other news...
I don't have any pictures of the 24 hour party.  David already posted his and others will likely pop up.  I do have a picture of three mo-fo's who are camping in my backyard.  I spotted Lyle, Ian and Josh when I was biking home from work.  They're on a bike tour.  One Pilsner led to another and soon there was no good reason to leave the cycling mecca of Manitoba. 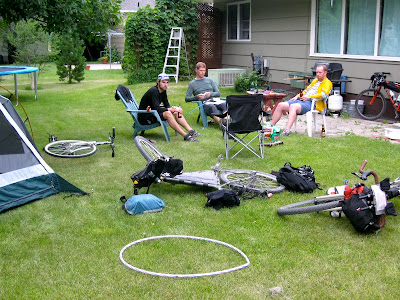