What a night for racing! The rain came through early and though the track was a little damp 16 ABES showed up for Stage One of the September Grand Prix. The racing started out with a Last Man out Race - the last person to cross the finish line in each individual lap was dropped. Johnny came through with a victory over super-stud Jeff Krahn. Results as follows:

It was a hard fought race with each lap progressively quickening. A little bit of moisture on the North turns may have played a factor and there were definitely some tire-touches/skids happening. Great race!

The second leg of Stage One involved the Individual Time Trial. Four laps of the W.C. Miller 400M track. Gavin and Curt showed up a bit late and only raced in the ITT. Bikes were flying and the ABES put on what could only have been our fastest times of the season. Results as follows:

Post race concluded at Grumpy's (as per usual) and there was a lot of chatter going on.  Some of the topics involved included:  Dark Cross - can any race be more awesome?, 29er's - Albert has fallen in love,  the new condom machine at Grumpy's - my fingers still smell like vanilla!, Head for the Hills 2011 - Bunge is the shit as far as bike sponsored places to work, oval track racing - ABES injuries/defaults would multiply exponentially, MCI res. #'s - Thomas is coasting this year, DB - what a douche, PB - too good to bike therefore runs late at night when no one can ogle his scrawny legs, the Duker - Hecla Lovefest before school starts? (halftime)

A great night of racing and even more great nights to come!  Next Thursday will be the Town of Altona Time Trials.  Two solid laps of the Town.  Brings your endurance legs boys! 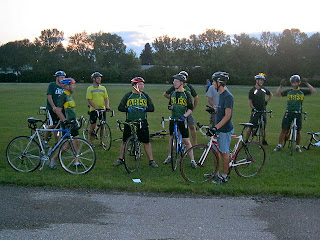 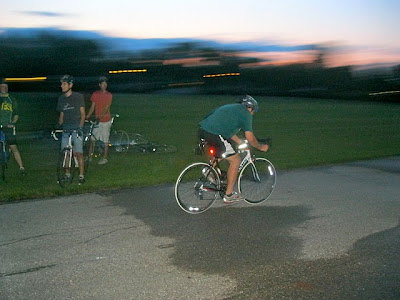