Thursday saw Gavin, Joanne, Cindy and I bootin'r over to Cable Wisconsin for the Borah Epic MTB race.  The race was Saturday and we'd rented a little 2 BR log cabin on the shores of Lake Namakagon for the weekend. 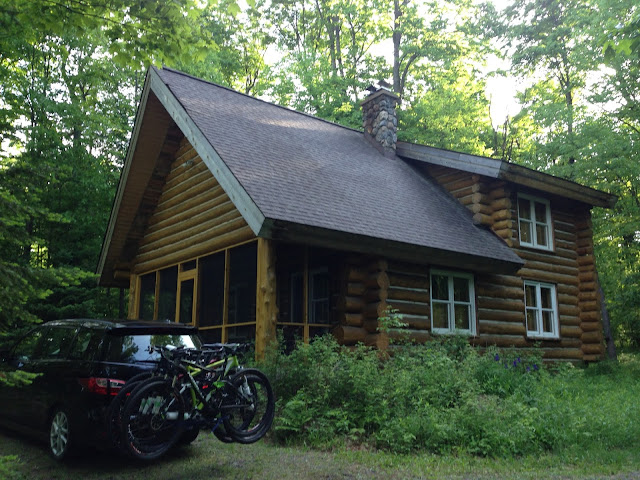 Friday morning was relaxing (coffee, TV, maybe beer, more coffee) before heading out for some brunch and some riding.  Trail maps were found and after some grub (and beer)... 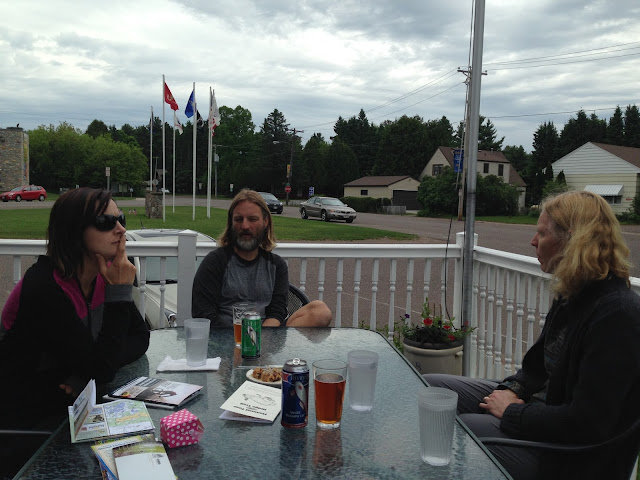 ...we finally got around to checking out some trails. 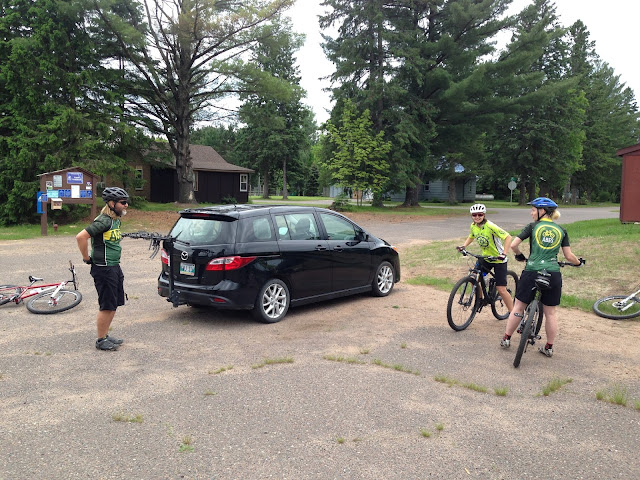 We left straight from downtown Cable (pop. 862) and hit some singletrack in the "Cable Cluster".  The area has a bunch of different clusters with varying amounts of singletrack, doubletrack, paths, etc.  We headed for the Ojibwe singletrack trail, knowing it was part of the next days race.  While the maps can be somewhat confusing at times the trails are well marked with enough trail markers to figure out where you are (and where you're going).  The singletrack was fun, definitely less flowy than Cuyuna with many more technical sections thrown in. 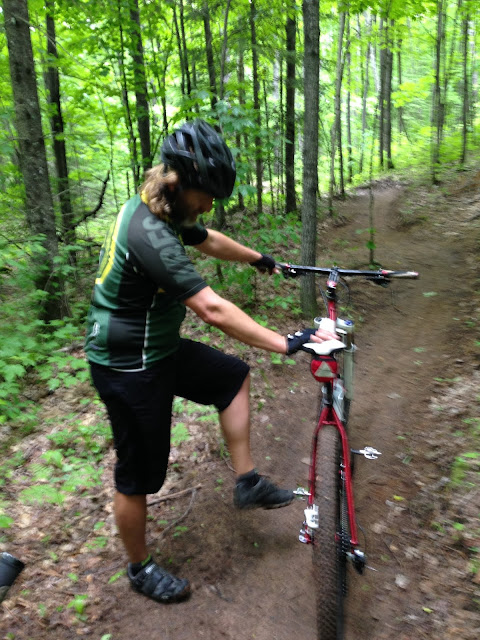 We ran along Ojibwe for awhile but unfortunately Joanne's neck/back was bothering her but, as the trooper she is, she toughed it out for us.  We managed to get in about 2 hours of riding before we saw the rain rolling in so we headed back to the cabin.  Cleaned up we headed in to River's Eatery for some sweet stone oven baked pizza and beer. The owners loved chatting up us Canucks.  We retired back to the cabin for the evening, prepping for the race the only way we knew how...Peanut Butter Porter! 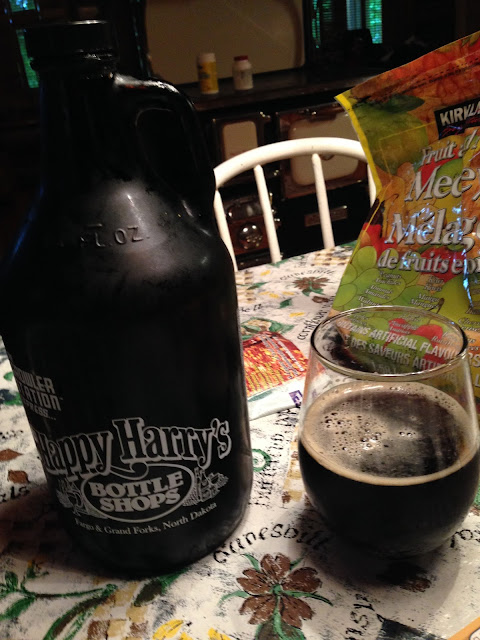 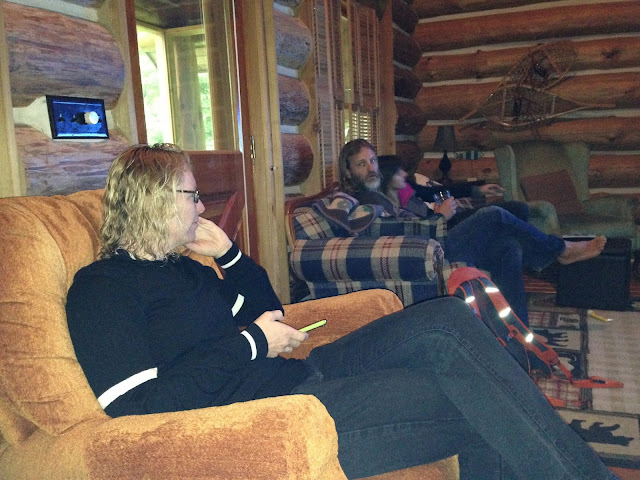 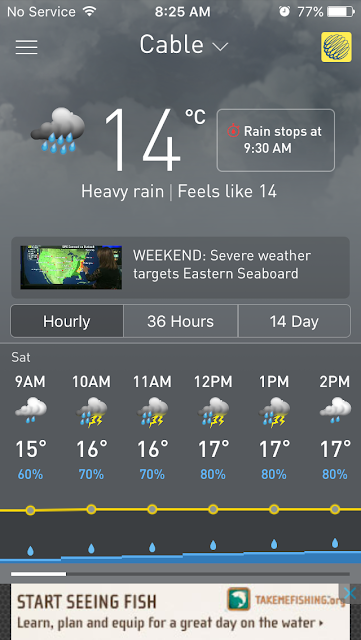 As we drove to the race it was raining.  Miraculously it stopped, shortly before we arrived. 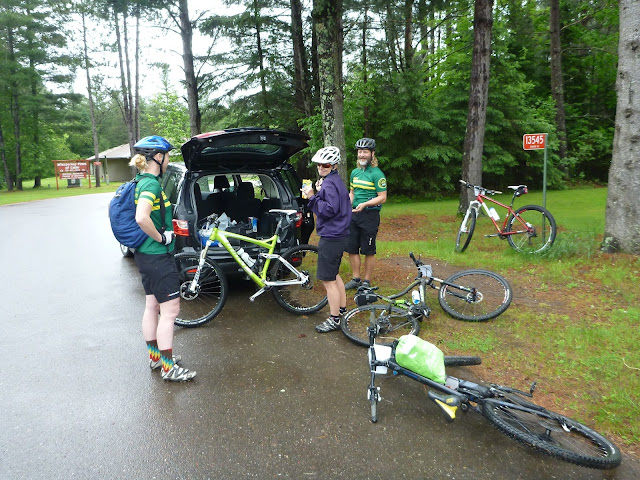 Geared up and ready we joined the throng.  Excited?  Yes, some more than others. 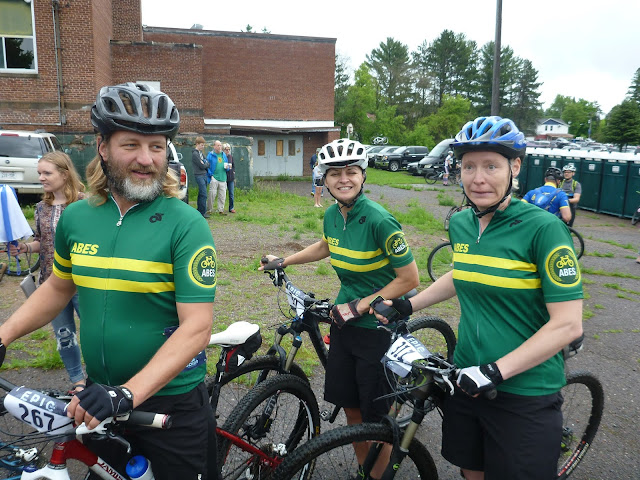 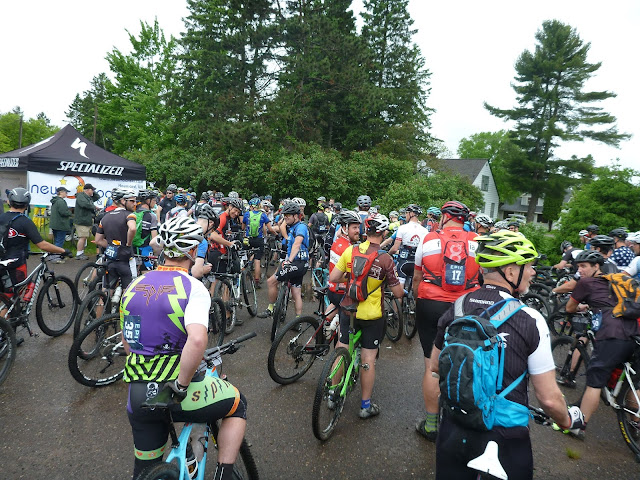 Approx. 400 racers started the full Epic (37 miles) and another 100+ did the half.  A mass start (with a few returning favorites at the front) was chaotic and slow but spread out nicely as we headed off down paved road.  Then we turned onto gravel, followed by (ugh) the power line cuts.  Damn you hills!  Massive rolling hills that sucked your legs right from the get go.  I'd never heard such mass expletives before.  They did MTN bikers proud.  From here on I can only comment on my own race experience.  I had sight of Gavin until the last of the massive hills but then he was gone and I was on my own.  With the masses of course.  And Cindy and Joanne somewhere behind me.  We thinned out slowly.  Not quickly enough to avoid a logjam as we entered the singletrack.  Enough logjam that I had a few minutes to snap some pics! 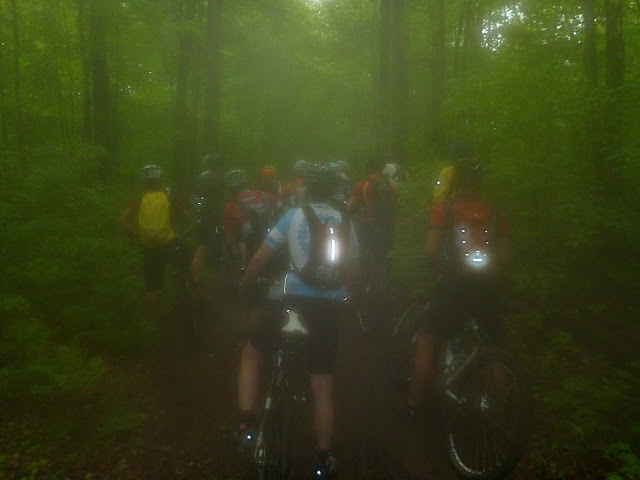 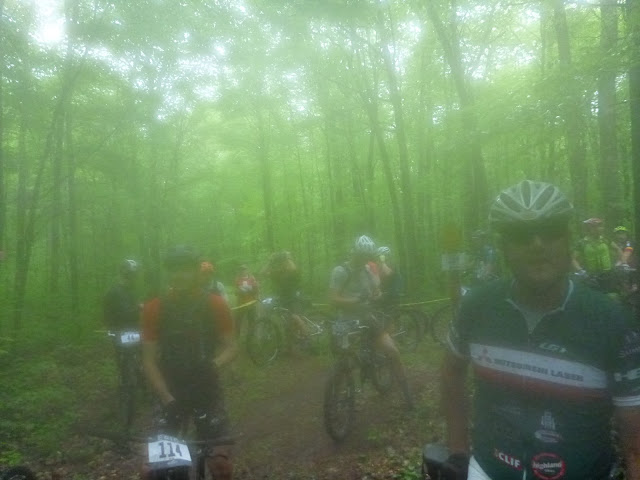 It took a little while but we spread out and grouped in with similar paces.  The trail was fun.  Some good flowy pieces mixed in with technical twists and turns, shortish climbs (nothing too massive on the singletrack) with lots of roots and rocks.  Lots.  And as the rain started again they became even slipperier. Dangerously.  Saw a number of spills and managed to avoid my first until about the 5 mile mark when the rider ahead of me (I'll call him Douche 192) got hung up on a rock and cut me off.  To avoid collision I veered into a larger rock and endo-ed.  A meagre "Sorry" and he was off, leaving me to pick myself up with encouragement from the riders now patiently waiting behind me.  Good thing I had experience at it.  Merely a trifle.

Everything was going well.  I slipped into a pack with a good pace and was feeling fine until, yep, my old nemesis.  A bridge.  The trail split and again the rider ahead of me hesitated on the left (dirt) side.  That left me the right (bridge) side.  Wood isn't grippy when wet.  MY tire shot right and down I went.  Unhurt but winded I lay there a bit.  Riders passing inquired as to my state of health and I wheezed that I was just fine.  But as I rode on I had trouble getting my lungs going for awhile and the legs felt bad because of it.  A few more miles and all was well again as I approached the first aid station.  Some nice, peeled bananas (right Joanne?), cookies, water and energy drink and I was off.  A long and sandy logging road back to the singletrack.  Damn you sand!  While being quite easy to ride along and a pleasant change for a little while it also did a nice job of clogging up my dérailleurs and chain.  Back on the singletrack things were grindy.  Brakes. Shifting.  All kind of ugly.  About Mile 12 or 13 I had my first chain suck.  And another.  And another.  IT didn't relent.  Every attempt at throwing more watts onto the pedals resulted in a sudden stopping of my crank arm.  Things weren't looking good.  One highlight was the Gravity Cavity.  It was something like this (and all smiles).

Forcing my way through a couple more miles (easy downhill, stop and start uphills) I'd managed to get close to the midway cut-off point.  I knew that time wasn't an issue for me but I'd hoped to be able to sort out my  bike issues.  Then.  Yep.  Nemesis.  Bridge.  About a mile and a half from the cut-off was a short bridge.  Didn't give it much thought.  Just before it was a small mud puddle that, as my tire hit it, caused said tire to veer just slightly.  That was enough.  MY bike shot right and I bailed left.  Face first into the embankment.  I lay there for a short while, sorting out that I wasn't severely injured and as I lay there I heard the squeal of brakes and a man's voice, "JESUS CHRIST! Are you okay!"  I assured him this was nothing new to me and only after much convincing did he continue on his way.  I dragged my bike from the small gully  and snapped this pic to remember it by... 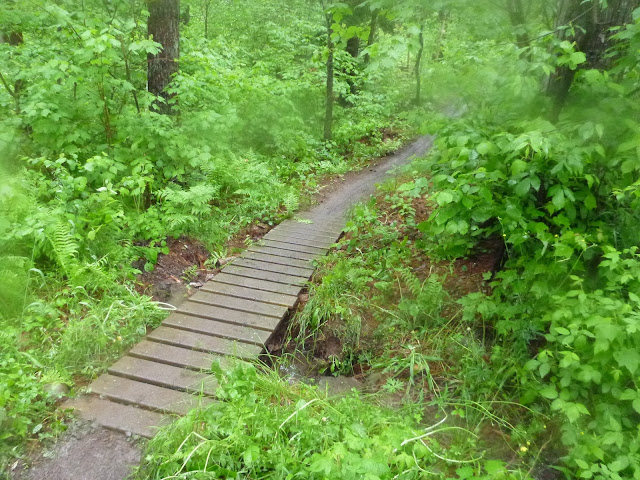 My bike.  This bridge was the last straw.  Caked in mud and grinding its way to this point it now gave up the ghost (no pun intended?)  Hopping (gingerly) back on it refused to shift.  It chain sucked.  It was done.  I pushed her.  1 1/2 miles to the cut-off.  Our Epic was over.

(Author's not: Just this evening, after a thorough cleaning, it was discovered that my rear shifter cable housing was crushed and the cable torn.  Most likely this occurred during my final crash.)

From the cut-off trailhead I bused back to Cable, then to the finish at Hatchery Creek in time to see Gavin finish! 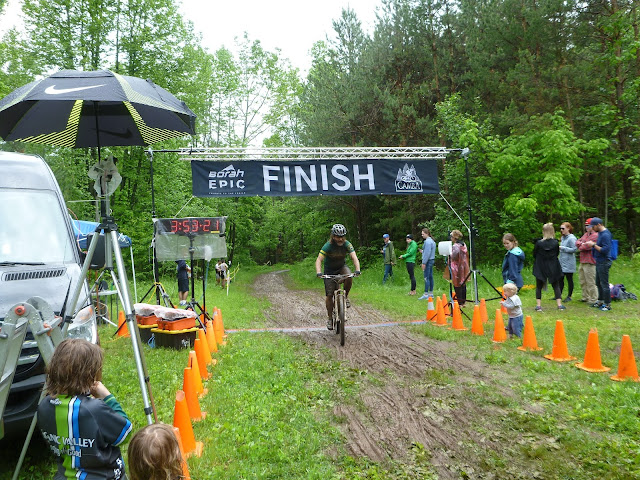 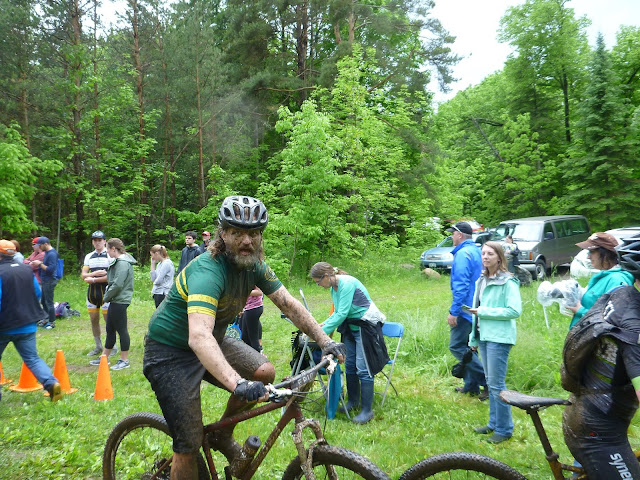 Yep, things were muddy.  Most riders crossed the line coated in muck, many cussing.  Gavin looked (see above photo) deathly but in good spirits. 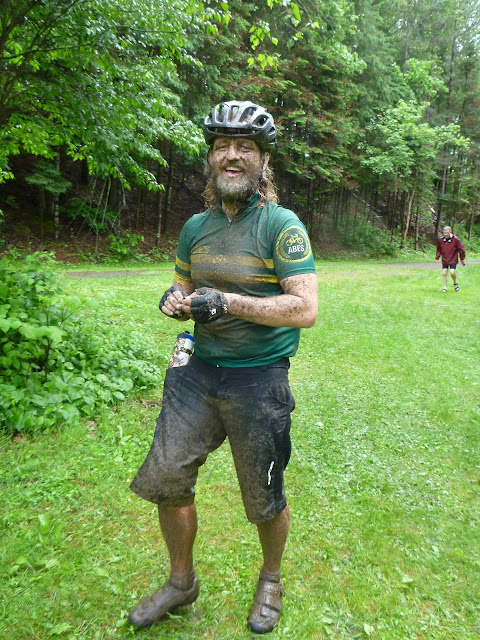 We cleaned up (in a creek out back) had a brat, chips, energy milk and headed back to Cable to get that car.  We weren't sure if Joanne and Cindy had made the cut-off time but we headed to the midway anyways to get my bike.  After discovering it had already made its way to the finish we also returned there, expecting the girls to be completing the Epic soon.  We weren't disappointed. They came through together, rocking the ABES colours! 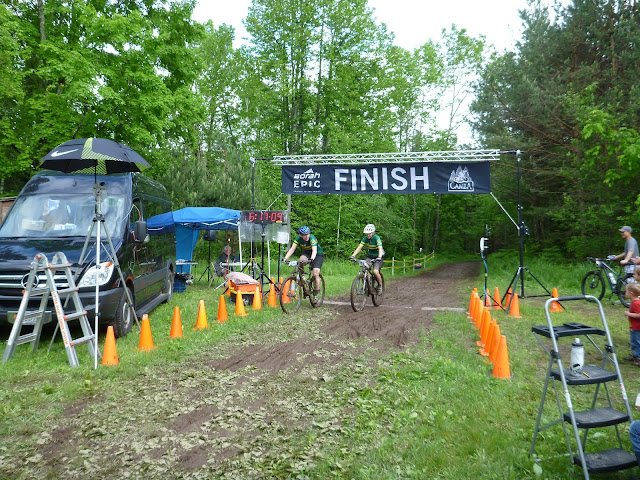 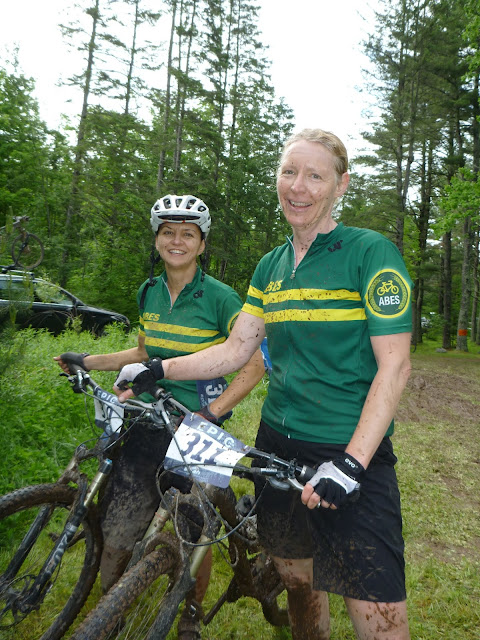 Post-race festivities had slowed at this point and after a clean up in the creek for the ladies... 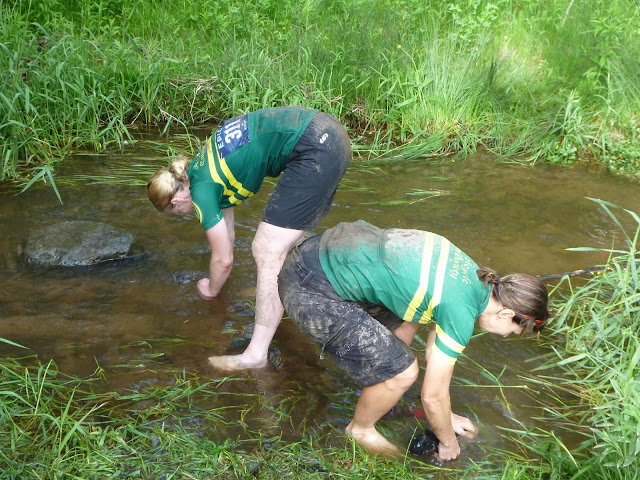 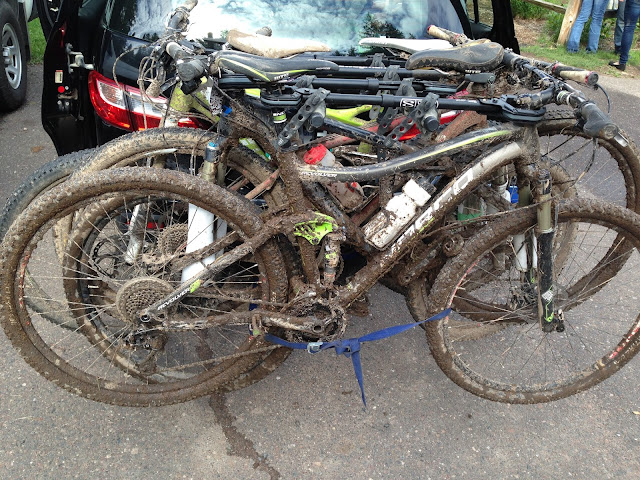 ...we headed back, cleaned up, grabbed burgers and beers at the local Loon Saloon and spent the evening revelling and replaying the race events.  Sunday we headed for home.

Any further details can be gleaned from Gavin and myself this weekend as we sit around a campfire, flingin' some squirrels and sippin' some fine Banquet from a stubby.  Cheers.
Posted by Altona Bicycle Enthusiast Society at 10:42 PM