The National Cyclocross Championships were awesome.  HUGE props to the organizers for a great event.  You raised the bar so ridiculously high that nobody will want to ever host again - you'll be hosting nationals forever!  The course utilized all of the best features of the forks, the run-up was acceptably unreasonable, the race schedule ran smoothly, our pathetic ABES tent was a perfect make-shift clubhouse, and the warm weather made everything better.  Personal highlights included: seeing Danick sprint for the win at the finish line, racing with 100 other cyclists on a dimly lit course on Friday night, awesome race coverage/media, watching Anna runs past two women at the barriers (Anna was easily the fastest woman at the barriers), the ABES/beer tent, cheering/jeering cyclists at the sand pit, giving high-five's to my kids during my race and finally being reunited with our missing ABES sign.

I admit to being upset when our sign was first taken.  We had just organized AD/DC, I was tired - and then somebody stole our GD sign!?  Eff'n eff'rs!  Are you kidding me?!  If anything happens to that sign I was going to call the cops!  Then I took a nap and had a bite to eat to cool my jets.  As the photos continued, I turned from pissy to pleased.  I started looking forward to the next chapter of ABES in the city although concerns were raised when we saw a diet of whole wheat cereal with almond milk for breakfast instead of its traditional diet of meat, beer, chips and cigarettes.

At Nationals, a posse tried to track down ABSEY.  It had been photographed at the Friday night party at Natural Cycles.  When we arrived on the scene, David found his way into private offices and back rooms but returned with nothing more than annoyed looks from the staff.  ABESY was finally presented at the Saturday night party where Anna and others spilled the beans on the entire scheme.  F’n eh!

Apparently, the ABES sign abduction has been in the making for a loong time.  Ever since ABSEY’s inception, a jealousy has been percolating at the dark red racing republic which finally erupted in the form of a kidnapping.  I know I get envious when I see pretty, shiny things, so it’s only natural that the dark side was jealous of our precious (excuse the mixed movie references).  Possible ringleader/pizza cat/awesome chick/brilliant bitch, fast bikin', Anna Schappert and Hawaiian shirt wearing/Kramer/Angus Young looking, always smilin’, Graham Madden abducted our sign at the AD/DC post race party while we were blissfully unaware.  Well done.  We'll be sure to return the favour. 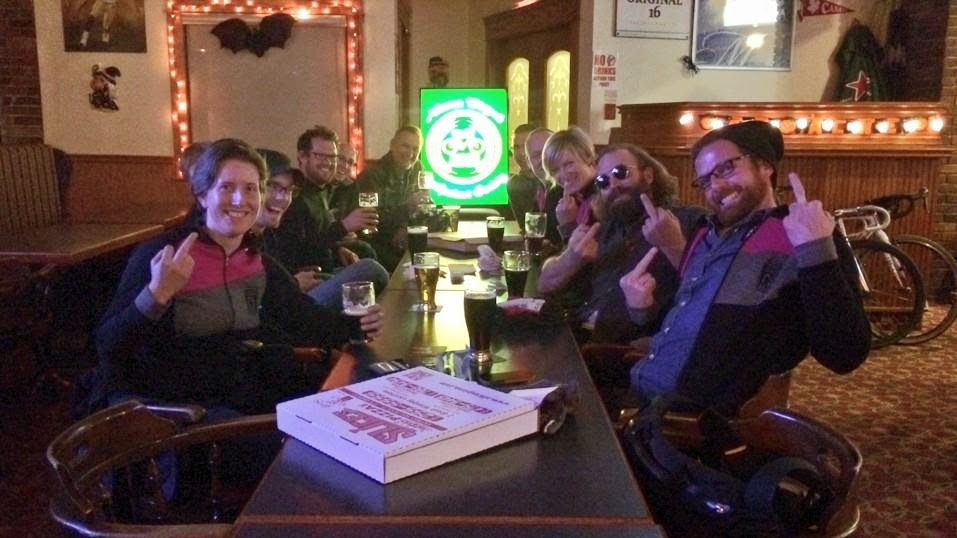