I have a beer for the first 6 dudes.
They’re free and they’re not very good.  Guaranteed. 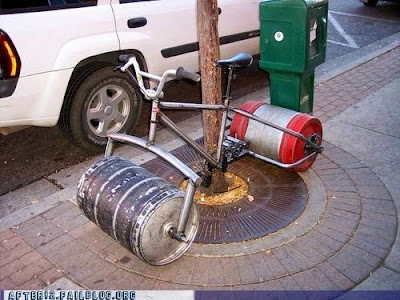 See you at 8.
Every year the Cross season has gotten better.  The organization, the courses, and the participation goes up a notch every year.  The season wind-up/provincial championships were held at The Forks (super cool), and Rocktona had its share of cycling enthusiasts: Thomas, Mia, Kate, Loch, Coen, Henry, Nelson and Leo were in the kid race, Albert, Steven, Cheryl, Lisa, Joanne and I watched Gavin and DB race away in a field of 79 riders, Kris had to endure a 60 minute race (vs. 20 minutes +1), and three Giesbrecht brothers were in the Open race where Evan got a flat tire on the last lap surrendering third place to his younger brother Jared.  There are a gaggle of pictures floating around the interwebs and an interview on CTV with Even Giesbercha.

Cross may be over but another cycling opportunity is a’knockin'.  Everybody is invited to ride or race a 40’ish km course starting at Colert Beach.  Riders will go along trails and rolling country roads and conclude with bbq hot-dogs.  Even if you don’t feel like “racing”, come out for a 40 k bike ride with friends - AND eat hot dogs!  Be ready to ride by 2pm at Colert beach.  Steven, Albert and I are confirmed.  Register here – it’s free.