Okay, so I've been a bit nervous about the ride since I've heard from people that says it's really tough. On Tuesday when we head over to the bike shop in Bedoin to pick up the bike, I bring my stuff along, but I'm really intending to ride back to the place we're staying (about 30 ks) and ride around a bit (there are hills and crazy roads everywhere) just to see how it goes. So we get the bike (it's great!), I get changed, and set off, away from Ventoux. Then I say to myself, what the hell, I could just ride up the first bit of the hill to see how it goes. So I turn around after about half a km and head toward the hill. As I'm riding back past the bike shop (which is right at the bottom of Ventoux) three riders are just on their way up (it would appear). I fall in behind them. I hear them speaking in German(!), so I talk to them and it turns out they speak English too. Johannes (56) is with his brother (47) and son (26). He's been up three times before. He thinks they'll do it in more than two hours, maybe two and a half. These guys don't look intimidating, so this sounds like a good way to try it. I ask if I can follow along, and since they're bikers, of course they say that would be fine.
The first five ks are pretty reasonable. At about a 5-6% grade you're riding through farmland and a couple of villages. Typical. Scenic. Deceptive. It's a hill, but it's not a MOUNTAIN. But around five ks up that changes. Abruptly. The grade goes to 8%, and doesn't relent from that for the next 10 ks. In fact, 10 ks up the hill the grade is 10%. No switchbacks. Just twisting and climbing, in a coniferous forest. Damn it's beautiful, if you've got the time to look up from your grunting!
I left the German guys behind by around 6 ks. I was "spinning" (you don't really spin on this hill) a 34t in the front and a 25t at the back, which was as "easy" as I could get it. When I kept the cadence steady around 75 (not as fast as I'd have liked, but the best I could manage) I was averaging between 11 and 12 kph. When the grade got to 11% I'd be between 10 and 11 kph and the cadence just got lower. You keep your head down and try to breathe steady. Panting is not helpful.
I stopped twice. Once at around 8 and 12 ks, just to steady myself and do a bit of a gut-check. I ate half of an energy bar, took some water, and then went at it again - maybe a minute or two total. Then I settled into a steady breathing pattern and it seemed possible. By 10 ks I was grinning at everyone I met because I knew I was going to do it. I could hold the pace, and my breathing was controlled. I was passed by four riders (who, I'm guessing, averaged about 13-14 kph and would have finished it about 10 mins faster than I did).
Six ks from the top (at Chateau Reynard) the trees disappear and it's open with steep chunky limestone slopes. The grade for the last 6 ks is mostly about 6%, because the road uses switchbacks to control the ascent. You wind your way up and every corner feels like a great break because thing flatten out. There was almost no wind up there, which was very fortunate, given what I've heard about huge winds that are possible.
At this point my biggest worry is that I haven't brought my camera (because I wasn't expecting to go up on this day). I stop one more time at Tom Simpson's memorial, then I'm at the top! It's huge guys! There are all these other riders up there. They're all so happy! Through the whole ride guys have been descending, so I'm already pretty confident that I can do the descent too. I asked a guy with a camera if he'd take a pic of me and send it to my email. He (Alain Auberger) was happy to. Then I took his picture too. Then I helped others take their pictures. The descent was fantastic! I hit 65 kph on one stretch and, if you knew there wouldn't be cars coming up, you could let it run faster!
My ride time was 1h 47m 37s. Total time was 1h 52m.
DB vs Ventoux
I went up again on Thursday morning, with the camera this time. Stopped a few more times to take pics, and then Margruite and my fellow travellers showed up at about three ks from the top and took a lot of pics. It snowed and sleeted for the last five ks (see the pics) and the cars couldn't make it to the summit. I managed to keep enough of my fat ass on the back wheel to have enough traction to make it all the way up again (The front wheel slipped a bit on the corners.). I couldn't descend that day. The brakes wouldn't work, and there was no way to control your speed, much less steer.
My ride time the second day was 1h 45m 39s. Total time was 1h 50m.
Biking really is the way to world peace! If Obama and Osama could only have biked up Ventoux together. Baguettes and croissants and beer at the top. That would be a summit! The Pax Ventoux. Bikes would save the world if we'd only let them.
In heaven the ABES would spend one Thursday a year ascending Mt. Ventoux, and then racing to the bottom, for beers and wine of course. There are cafes and bars everywhere out there!
Paul 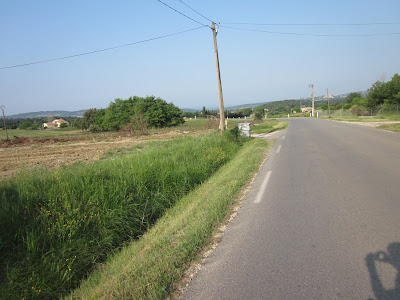 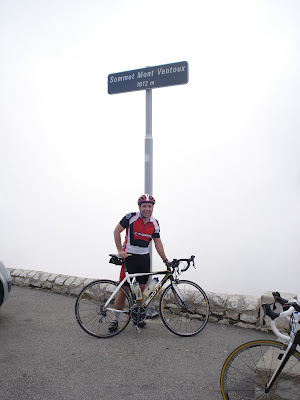 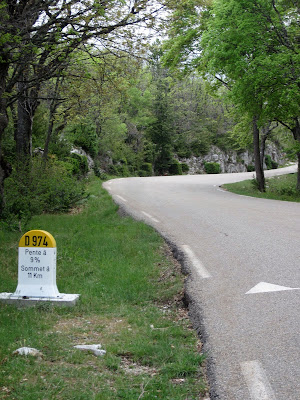 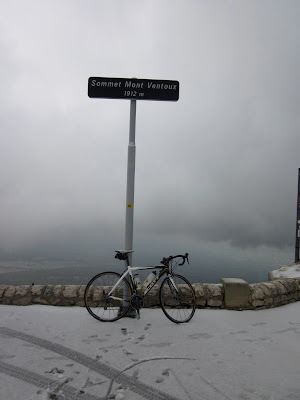 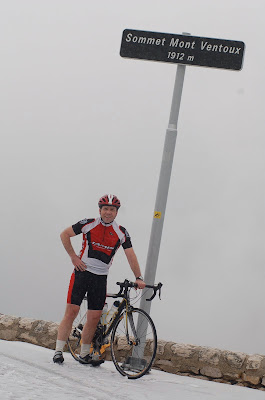 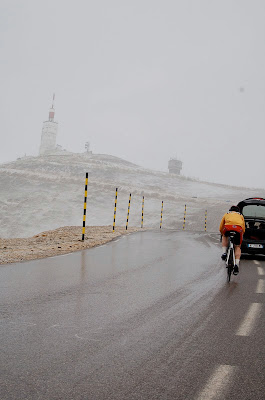 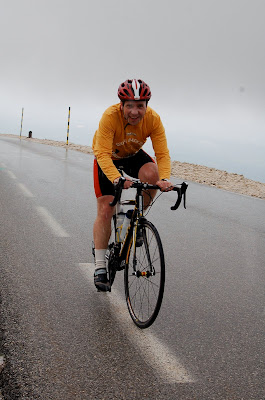 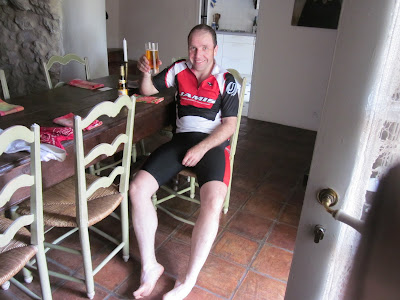